Flying suppliers: When will delivery drones become established in e-commerce? 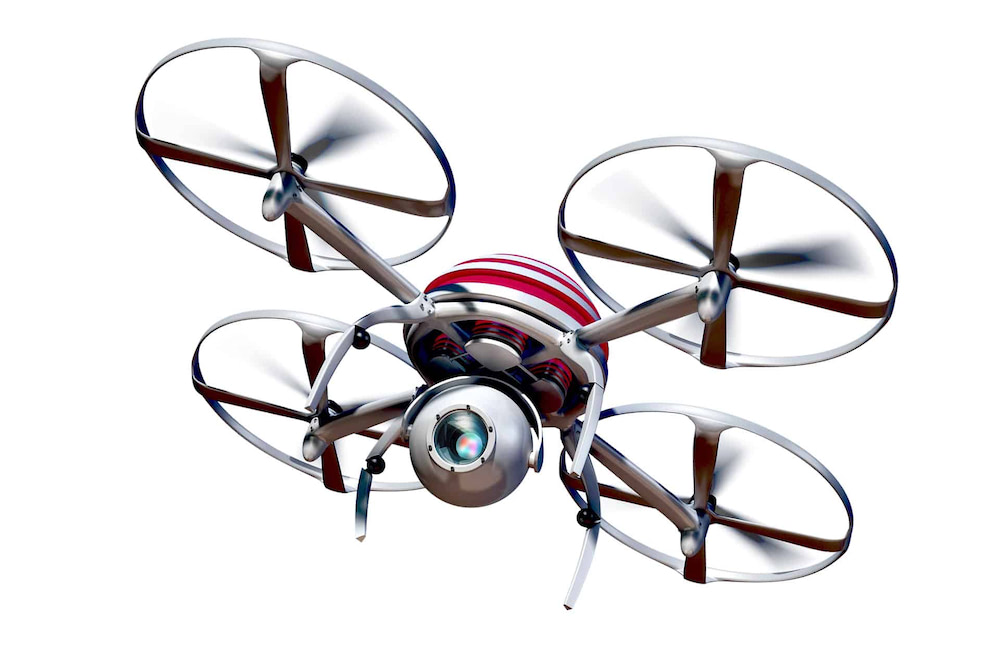 Today, no one is surprised when small robots buzz past in the sky, because drones have long been part of Hollywood movies, books, the gaming industry and a walk in the park. What used to be predominantly a hobby for technology freaks is now also popular with "normal people". At Mediamarkt, you can already find them on the shelves in all sorts of variations. Small drones can be bought for as little as 15 euros. But they are not just a diversified toy. Delivery drones could even revolutionize e-commerce, because they are one of the top trends in parcel logistics.

From kite to drone

In the past, people used to let kites made of paper take to the skies - today, they're drones.

[tooltip title="Drone" color="blue"]The drone takes its name from the male bee. Biologists refer to this as a "drone". The task of the male bee is simply to fertilize the queen bee. After mating, the males have fulfilled their duty and usually die. Thus, even a drone can crash without injuring any occupants. [/tooltip]

Since then, however, not much has happened in terms of delivery drones in e-commerce in Germany. The mail-order giant Amazon continues to experiment in order to implement the "Prime Air" project. The project is about Amazon's expansion of delivery drones. Its goal is to soon deliver parcels by drone.
DHL, on the other hand, has already tested the third generation of its parcel copter. In 2016, the helicopter drone was able to undertake 130 autonomous loads and unloads in the municipality of Reit im Winkl and on the Winklmoosalm. The drone was able to carry a load of two kilograms and fly at a speed of 70 kilometers per hour.

China is a bit further ahead. There, the company "ele.me" is already delivering groceries in a 57-square-kilometer industrial park. The drone does not deliver the goods from door to door, but only from drone station to drone station. Nevertheless, it saves the delivery people a lot of time. They only have to pick up the groceries from the drone location and bring them to the customer. Even in parts of New Zealand, the American company Flirtey is already delivering pizzas by drone.
###Performance of the 100 largest German online stores

When will drone packages be available to everyone?

A major city with drones circling in the sky, carrying small packages under their propellers and slowly dropping them off at front doors. While this may look a lot like the scenario from a science fiction movie, it's not entirely far-fetched. A lot has already happened since the first air-based robot. Researchers are constantly working to further develop the delivery drone to create new uses.
In 2016, drones learned to see and thus avoid obstacles. With a kind of sensory eye, the delivery drone can now detect objects in its flight path and fly around them. The next step is to make drones weather-resistant so that they can take off on their flight even in difficult weather conditions. This would also make them the perfect delivery messenger in e-commerce.

So far, however, only 45 percent of Germans would choose the delivery drone in e-commerce for shipping their goods - there is definitely still room for improvement. 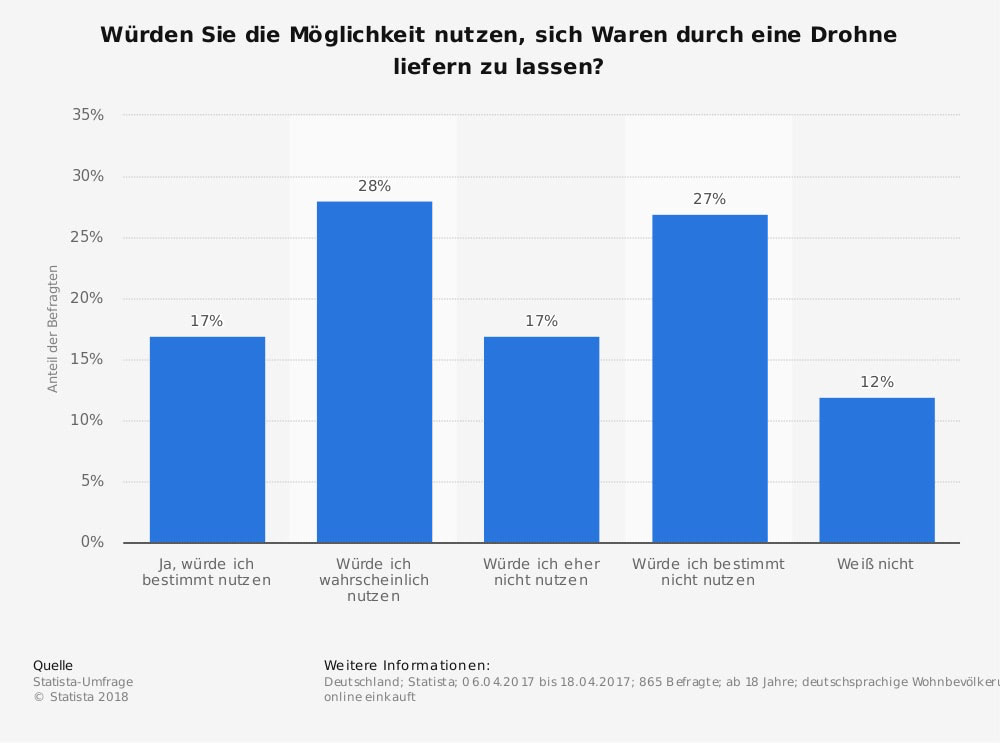 45 percent of Germans would have goods delivered by drones. (Source: Statista)

Opportunities for e-commerce and suppliers

A particular problem in the delivery industry is the so-called "last mile."

[tooltip title="Letzte Meile" color="blue"]This is the term used to describe the final route from the parcel's location to the customer. Every year, costs of around 70 billion euros are incurred for this delivery route. A lot of money for online retailers and suppliers.[/tooltip]

In this area, air-based delivery robots could offer a great opportunity. Delivery services could avoid a lot of carbon dioxide otherwise emitted by delivery cars. In addition, the drone can avoid traffic congestion and save a lot of time, in return for delivery by delivery truck. Therefore, the delivery drone can drop off the package to the customer as soon as possible. Medicines or blood donations could be delivered faster.

To ensure hassle-free delivery by drone, Amazon is working on some extra features. For example, the package drone should be able to react to people's gestures so that it can understand a waving at and waving away as a correct or incorrect delivery.

Since delivery drones in e-commerce have so far only been able to carry light cargo, Boeing is working on a flying device that will be able to carry loads of more than 200 kilograms. However, Boeing has not yet commented on speed, range or battery charge, so the drones are not expected to be deployed anytime soon. However, Amazon's trial shows that it is definitely possible to deliver smaller packages by delivery drone.

What is the catch for delivery drones in e-commerce?

Until we receive our packages from Zalando, Amazon and Co. by drone, it should still take some time. One drawback could be the low payload of the drone, because even with a flight weight of five kilograms, drones may only be flown within sight of the pilot. In addition, previous drones collided with houses and trees in strong winds or rain.

Not all legal conditions have been clarified yet, which makes the enforcement of the delivery drone in e-commerce much more difficult. The battery capacity of air-based robots is still not sufficient to deliver packages over long distances. The fact that drones are not allowed to fly over residential properties or crowds of people does not make things any easier either. After all, that would be unavoidable in parcel delivery. Accordingly, retailers will probably only be able to launch their pilot projects once all these things have been clarified and drones have been developed to the point where they can also carry heavy payloads.

There is still work to be done in terms of delivery drones in e-commerce. But the eco-friendly option is definitely an alternative. We would probably be happy to receive our parcels from a small, flying robot and even faster than we are used to. Since the delivery drone can be precisely located, online retailers always know where the order is. This allows them to regularly inform their customers about the status of the delivery. With personalized shipping messages and fast delivery by the drone, online retailers can keep their customers completely satisfied.
So, like chatbots and voice assistants,it offers e-commerce a great opportunity. Although the development of the delivery drone is still in its infancy: in the future, drone research will continue to advance. The small robots will become faster, their performance greater and the price-performance ratio better. For this, however, we need one thing: patience.

More on the topic "Artificial intelligence in e-commerce" can be read in our new blog series.